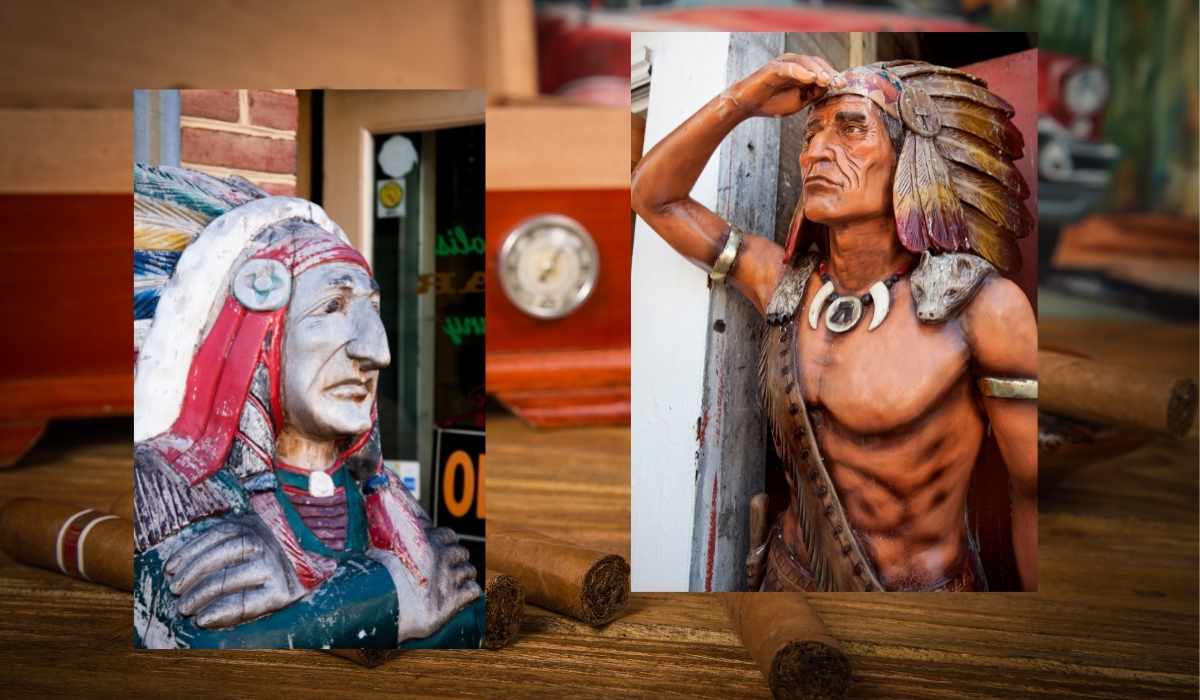 Have you ever wondered why an Indian has always been associated with a Cigar Store or Tobacco Shop? We dive into the history and symbolism of the Cigar Store Indian.

A carving of a wooden Indian, a red, white, and blue striped pole, three golden balls suspended from a carved bar, and the mortar and pestle – these were symbols used by early storekeepers to advertise and inform a primarily illiterate populace of their respective trades and services. And with only 12% of the people in the world able to read and write in 1820, the use of such symbols wasn’t really an option for business owners, it was a must. This is the story of the cigar store Indian.

When Christopher Columbus traveled to the new world he was given a gift of tobacco by the local indigenous people (at some point in November, 1492, and somewhere in the Caribbean, probably around what is now Cuba).

He wrote about the experience in his journal and brought tobacco back to Europe. Europeans then related tobacco to the “Indians” who introduced it to them.

Actually the word “Indian” did not come from the old myth that Christopher Columbus thought he landed in India, at that time India was not known as India, but rather Hindustan.

Columbus’s men (and later explorers) seeing the natives either naked or with what appeared to them as primitive clothing, watched the way they lived off the land and coined these new people “Ninos Indios” or, translated into English, “the Children of God.” Later, it was easier to condense that into “Indios,” and when the English tried to pronounce it came out as “Indian.”

In 1560, Jean Nicot, a French diplomat and scholar, while visiting Portugal, was introduced to tobacco. He became intrigued by tales of the medicinal properties in the plant. He decided to test a tobacco ointment on a Lisbon man with a tumor. The man was cured and Nicot became convinced that tobacco could be effective in treating many conditions, from cancer to gout to headaches.

In 1561, Nicot returned to Paris where he presented Queen Catherine de Medicis with leaves from a tobacco plant. He also gave her instructions for preparing a simple headache remedy by crushing the leaves into a powder that could be inhaled through the nose.

The remedy, which proved satisfactory, soon became popular with members of the French court, who used tobacco powder to stave off various illnesses. Soon tobacco use became popular with the upper classes. Eventually the plant was cultivated in France and other parts of northern Europe to fulfill demand.

In 1753, the Swedish naturalist Carolus Linnaeus named the genius Tobacco Cultivars Nicotiana, in recognition of Nicot’s role in popularizing the plant. Nicot’s name was also immortalized by the term nicotine, the name given to the active ingredient in tobacco. It was first isolated from the plant in 1828.

In 1586, Sir Walter Raleigh (writer, poet, soldier, politician, courtier, spy, and explorer) returned to England after colonizing Virginia, bringing with him maize, potatoes, and, you guessed it, tobacco. He introduced England to pipe smoking which became exceedingly popular

The cultivation and consumption of tobacco spread with each voyage of discovery from Europe to the new world. This period of discovery was not only for adventurers but also for merchants. With commerce and trade came craftsmanship and with craftsmanship came the birth of the three dimensional wood carvings that would evolve over time.

In the years that followed, Virginia tobacco poured into England through its seaports and into the mouths and lungs of the English. With its inseparable connection to American Indians, it wasn’t long before tobacco merchants used depictures of Indians to lure customers into their shops.

]Having never laid their eyes upon a Native American, early English carvers created caricatures, based on descriptive hearsay and drawing from the tales of those who had visited the American colonies.

In 1617, small wooden figures called “Virginie Men” were placed on tobacconist’s countertops to represent various tobacco companies. These “Virginie Men” would be the archetypes of what would become the traditional Native American-style cigar store Indians. Yet because the British craftsman were unsure what the Native Americans looked like, they were depicted more like African slaves adorned with fanciful headdresses and other exotic regalia. Eventually, the European cigar store figure began to take on a more authentic, yet highly stylized, appearance. By the time these figures began arriving in America in the early 19th century, they had become a fairly accurate and beautifully carved depiction of a Native American.

Museum guides and armchair historians will still tell you that the cigar store Indian was positioned outside tobacco shops for the benefit of illiterate customers. While there is truth in that, as we mentioned earlier, there is another reason why cigar store Indians became so widely popular in the second half of the 19th century. It starts with ship figureheads. From the time of the 16th century galleons, bows of ships were decorated with figure heads and shipbuilding ports attracted ship carvers to make them. Figureheads were massive wooden sculptures and they were a beautiful art form.

The majority of wooden Indian carvers came from the shipyards. Of course these wood makers had the skills to craft tobacco store Indians, but they didn’t always have the time to do so. But this would soon change.

On two days of the American Civil War, March 8 and 9, 1862 in a naval battle at Hampton Roads, Virginia, the Confederacy attempted to break a Union blockade. The CSS Virginia (which is known more familiarly as the Merrimack) had success the first day.

On the second day, it came up against the USS Monitor. It was the first time two ironclad warships engaged in battle, and although the clash was inconclusive, it forever changed naval history. Navies around the world realized that wooden ships, and particularly wooden battleships, were things of the past.

The shipbuilding industry transitioned from wooden ships to ironclad steamers that had no need for figureheads. And so those ship carvers, many of them young men, scurried around to find work that fit their talents. These craftsmen gradually turned to producing carousel figures and cigar store Indians.

The business became highly competitive since the carvers were competing with each other for the tobacconists’ business, and each tried to outdo the other in individuality, versatility, and depth. A few carvers even used Native Americans as models.

American carvers sculpted Indian chiefs, braves, princesses, and Indian maidens, sometimes with boarded papooses. Most of these displayed some form of tobacco in their hands or on their clothing. They generally depicted stereotypical chiefs and squaws, clothed in fringe buckskins, draped with blankets, decorated with feathered headdresses, and sometimes holding tomahawks, or bows, arrows, and spears. Their facial features rarely resembled members of any particular tribe.

The man who probably made more wooden Indians than anyone else was Samual Anderson Robb (1851-1928). Robb grew up in Brooklyn, NY, as the son of a Scottish shipbuilder. Following a five year apprenticeship with a shipbuilder, Robb went to work for a wood carver where he first started carving tobacco shop Indians. At night, Robb attended the National Academy of Design and then Cooper Union, where he continued to hone his skills as a wood carver. He then worked for the William Demuth Company, which specialized in pipes, smoker’s requisites, cigar store figures, canes, and other carved objects.

In 1876, the 25-year-old Robb opened his own workshop, which later grew to the largest of its kind in New York City. His carvings ranged from cigar store Indians to circus wagons and ventriloquist dummies. Recently, a carving by Robb of the English comic character Punch sold for $542,400.

Historians believe carvers created over 100,000 cigar store Indians, yet there are relatively few original ones left today. Those that do exist mostly reside in museums and in private collections.

The cigar store Indian became less common in the 20th century for a variety of reasons. Sidewalk obstruction laws dating as far back as the early 1900s were one cause.

Later issues, including higher manufacturing costs, restrictions on tobacco advertising, and increased racial sensitivity, all began to relegate the figures to museums and antique shops.

Many also were destroyed during scrap drives for metal and wood during WWI and WWII. Cigar store Indians are viewed as folk art and some original models have become collectors’ items, sometimes drawing prices up to $500,000.

Collectors determine the value of an original cigar store Indian by its condition, the artistic integrity of its form, and the quality and intricacy of the carving – in that order. Wooden Indians with their original paint are almost impossible to find because itinerant painters repainted them on a regular basis as routine maintenance.

While the cigar store Indian may have faded into history, they haven’t, as you can see, been forgotten.

Oh…..and those other symbols:

The red, white, and blue stripes in the barber shop pole represent blood, bandages, and veins. For thousands of years, barbers didn’t just cut hair and shave beards, but they also performed surgery and dentistry.

The three balls suspended from a curved bar are synonymous with pawn shops. The origin of the “three balls” stems from the Medici family coat of arms. They are the family that established the Medici trading and banking empire in Florence, Italy. Legend has it that someone from the Medici family fought a giant and killed him with three sacks of rocks. The three balls, or globes, later became part of the family crest and ultimately the sign of a pawnbroker. 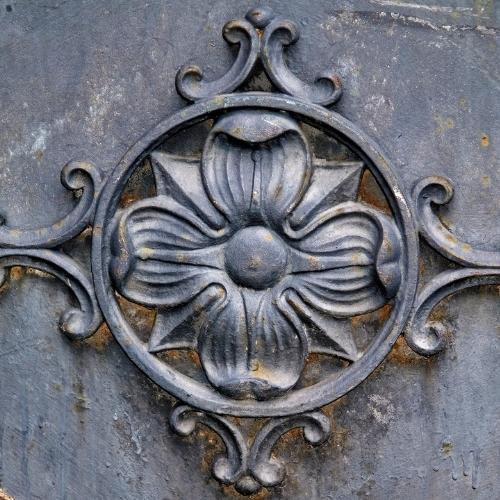 For this article, we are focusing on two specific iron products: wrought iron and cast iron (we will also touch briefly on mild steel).

No products in the cart.

Join Waitlist We will inform you when the product arrives in stock. Please leave your valid email address below.